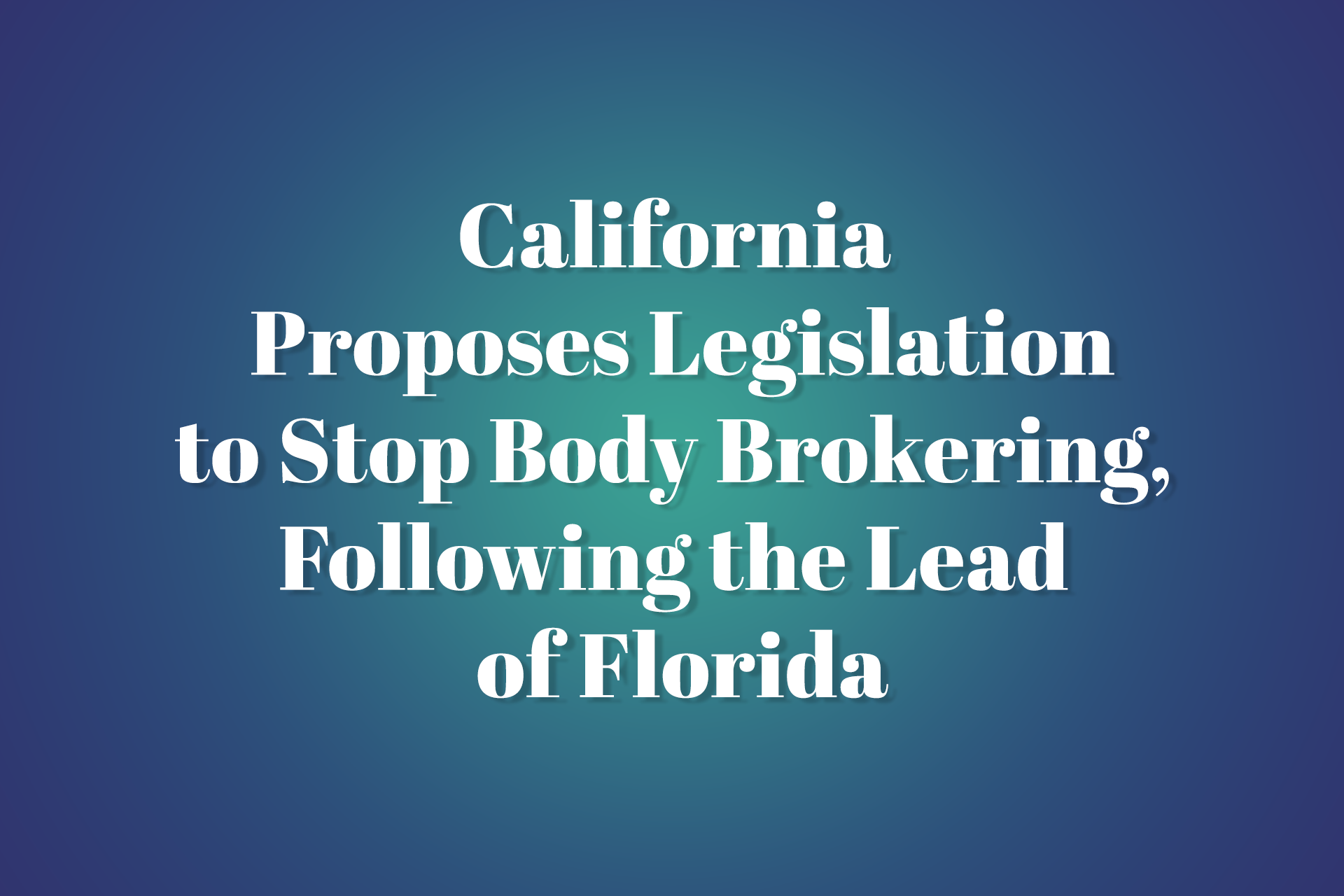 While people have called the treatment industry in Florida the “Wild West,” the real wild “west” has been California, which, unlike Florida, does NOT have any form of law on the books that criminalizes or prevents patient brokering (accepting or receiving payment for health care referrals, or using something of value to induce or entice a patient to select a specific treatment provider).

The right people, in the right place, at the right time, who understand that the treatment and housing industry in Florida has historic roots, for which this latest chapter is not indicative of the phenomenal work that Florida-based providers have offered to our nation’s afflicted for over 50 years.

The Orange County Register (which, like the Palm Beach Post, has done an exceptional job of reporting on this crisis of ethics) reported yesterday in their article “Bill Aims to Plug Holes in Addiction Treatment Industry,” that California State Senator Pat Bates introduced legislation on Wednesday (1/17) to try to address these issues.

“For more than 20 years, several bipartisan efforts to address the challenges surrounding the state’s drug rehab history have gone nowhere due to opposition from vested interests,” said Bates, R-Laguna Niguel.

“While I’m under no illusion that pursuing greater oversight will be any easier this year, doing nothing is not acceptable for constituents who have contacted me on this issue. The Southern California News Group’s thorough 2017 investigation into the industry makes it clear that reforms are needed.”

Much like the nationally recognized and heralded reporting on this same topic by The Palm Beach Post – “Addiction Treatment: Inside the Gold Rush” – the Southern California News Group’s investigative reporting found that as opioid addiction has soared, unscrupulous treatment center and housing operators flocked to fill the void of existing providers for which insurance money now existed under the “Essential Health Benefits” requirement of the Affordable Care Act.

Like Florida, people with Substance Use Disorders (which, sadly, SCNG still refers to as “Addicts”) from across the country but mostly the western states areas were lured to California with offers of free travel, rent, cigarettes, and other inducements.

But unlike Florida, California has had a very “hands-off” approach to regulating the industry, which has made the barrier to entry to treatment so low, it is virtually non-existent.

As we have been reporting here at SLN for years, historically there has been no insurance coverage to treat Substance Use Disorders.

This lack of revenue caused physicians and other licensed health care providers with proper credentials to stay out of this system of care.In addition, many physicians were equally guilty of discrimination of not wanting to work with “those people”.Further, since there was no economic incentive to enter this space, the system of care significantly lagged in keeping up with the science.

Profit drives innovation. Innovation drives efficiencies and cures.Since 2010, and now faced with a pool of money and long-standing demand, the time was ripe for addiction professionals to find a calling for which they could also make a living.

But with the untimely opioid epidemic, demand was too high to fast; there were not enough professionals; and the laws in place that licensed such programs were outdated.

The bill, SB 902 is still a work-in-progress, the Senator said, with language to be crafted with the help of those involved. She wants to improve patient well-being and increase public safety of neighborhoods hosting rehabs and sober living homes, she said, and aims to stop the industry’s bad actors, not those with strong records of helping people.

In 2016, the California Senate Health Committee rejected her SB 1283 that would have allowed a city or county to craft health and safety standards specifically for sober living homes (likely because it violated the Fair Housing Act, as drafted).

This past November 2017, a bipartisan group of the U.S. House of Representatives’ Energy and Commerce Committee asked California and five other states, including Florida’s Dave Aronberg and Al Johnson, for information on allegations of patient brokering.

Sen. John Moorlach, R-Costa Mesa, represents an area that’s is alleged to be home to one of the densest concentrations of treatment providers and sober living residences in the state.

Both Costa Mesa and Newport Beach have waged an open war with treatment and housing providers, but not under the guise of trying to correct the industry and make it better, but admittedly, the force such people out of their borders as being “undesirables.”

“I will be as supportive as I can be,” said Moorlach. “As with any industry, there are bad players. And they’re the ones that need to be addressed.”

At least they are beginning to “say” the right things. But their motives will be borne out in their actions.

Florida is a shining example of what you can do when you embrace the treatment, housing and recovery community, and work in tandem with providers to make the area the “gold standard” for such health care.

To learn more what you can do, also visit the National Recovery Council at www.nationalrecoverycouncil.com