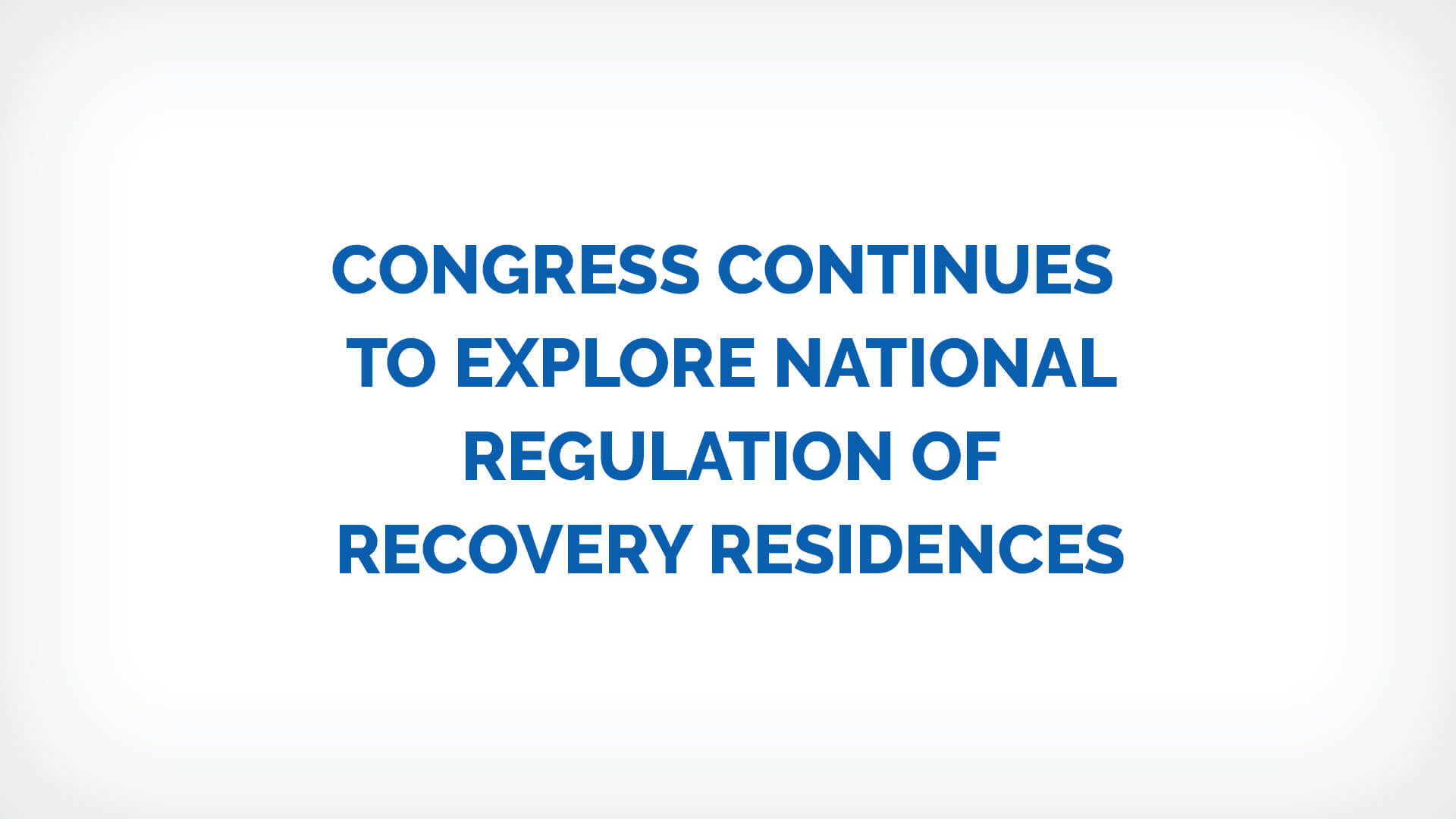 Dubbed “The Excellence in Recovery Housing Act,” the proposed law would require the National Academy of Sciences to study high-quality recovery housing and make recommendations for increasing its availability. It also would determine how to improve data collection about recovery, ensure that medication-assisted treatment would be available for people seeking to stay sober and explore the legal tangles that still exist on the state and local front involving recovery housing.

The bill also would push the federal Substance Abuse and Mental Health Services Administration to work with “reputable providers” to come up with comprehensive guidelines for struggling state governments, and would provide some $57 million in grants states could use to help make quality housing a reality.

This bill will help SAMHSA improve those guidelines, and provide resources for states to promote the availability of high-quality recovery residences. It has the support of a variety of large, national treatment-related groups.

The introduced bill is attached. As you can see, not much on the bones yet, and likely will not, as the agencies of the federal government, led by President-elect Biden and his new administration will draft proposed regulations if the bill is passed. The devil is always in the details.

The remainder of the OC Register’s article, however, reminds all of us that California is not leading the nation in addiction treatment and care. If anything, it remains far behind Florida’s progress to protect both people moving through treatment and recovery, and protecting the honest providers who find themselves victims as well from the same vulturous type of actor.

First, the California Assembly will apparently try to reintroduce legislation (again) to require outpatient treatment programs to be licensed, They are apparently now completely unsupervised by the state. Florida has always licensed and regulated outpatient treatment providers. Why California has not may answer why that state leads the nation in fraud in this space. California Governor Gavin Newsom last vetoed such a measure, claiming, “developing a new licensing scheme is a significant undertaking, and would require a significant departure from the bill as enrolled.”

Second, the California Assembly will reintroduce (again) a vetoed law which would prohibit treatment service providers from false advertising and marketing. Governor Newsom vetoed the last version of this bill over concerns that the state “would be asked to police recovery residences, something the agency currently doesn’t handle.”

Again, Florida identified the same problems early on, created targeted legislation using the input of dozens of industry professionals, civic groups, law enforcement, and elected leaders, and has had that model law on its book for a few years now. States such as Tennessee have adopted Florida’s approach in this regard.

Last, it seems the California Assembly is going to continue to try to eliminate recovery residences from residential neighborhoods by claiming they aren’t compatible and don’t belong, by seeking to amend the Fair Housing Act and the Americans with Disabilities Act. According the article, State Assemblywoman Cottie Petrie-Norris, D-Laguna Beach, who is spearheading the bipartisan group of state legislators pushing for these laws in California, is requesting that federal lawmakers “clarify the Fair Housing Act and Americans with Disabilities Act to state precisely when substance use disorder qualifies as a disability, and under which circumstances local governments can regulate recovery housing.” From our experience, this request for “clarification” is an age-old code word for “help us discriminate without getting into trouble by the Department of Justice.” Logic would seem to dictate that, if the Trump Administration was not interested in tinkering with these civil rights laws, the Biden Administration likely will be hands-off as well.

From our perspective, there are more than federal laws, regulations, case law, and published statements from the Department of Justice over the years to provide that definitive certainty and clarity. One doesn’t get to keep asking the same question over and over again, simply in the hopes of getting a different answer. Discrimination is discrimination, no matter the group of people being discussed or how they are perceived by the public as “undesirables.” Congress has remained very adamant since the adoption of the Americans with Disabilities Act (1990) and the Federal Fair Housing Amendments Act (1988), that addiction is a disabling, lifelong disease that requires modalities of treatment and a recovery support community different in kind and scale than all other medical disorders.

Under the guise of moving forward and making progress, the State of California, it seems, is asking the federal government to allow it to discriminate since the state’s governor has repeatedly vetoed efforts to curb the abuses in the industry itself. We are aware that officials from Florida have spoken with their California counterparts over the past few years. While some progress has been made on the prosecutorial front to combat fraud and abuses, the legislative component appears to remain a hurdle in that state.