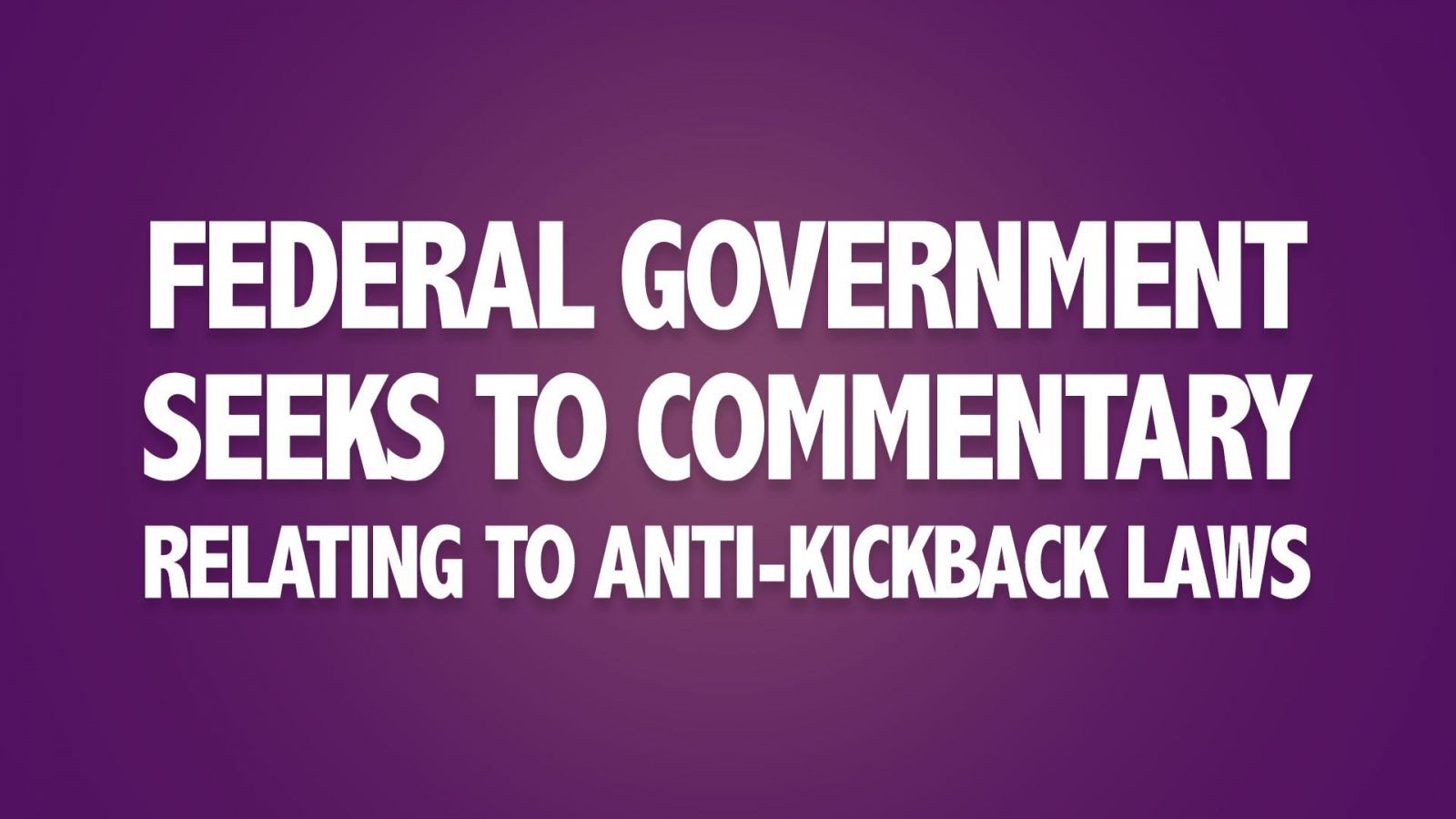 According to an article published by FierceHealthCare.com, there continues to be a groundswell of opposition from hospital trade groups to the continued application of the federal anti-kickback laws to the extent they “stand in the way of growing participation in value-based models.”

Comments and opposition to existing payment structures came from major hospital groups and other industry stakeholders in response to the Department of Health and Human Service Office of Inspector General’s request for information on ways to reform the Stark and anti-kickback laws.

In its letter to OIG, the Federation of American Hospitals (FAH) said value-based payments are “hindered by the existing fraud and abuse regime.” To address this, OIG should build an overarching waiver to anti-kickback laws for advanced payment models run by the Centers for Medicare & Medicaid Services.

Provider groups, including the American Hospital Association, have long argued that the Stark and anti-kickback laws pose a major barrier to care coordination, a crucial piece of these new payment arrangements.

“Provided that the compensation to be received is fair market value, does not take into account the volume or value of referrals and is commercially reasonable, the arrangement should be deserving of safe harbor protection,” the group said.

Anti-kickback provisions, AEH said, are overly broad and could apply to any payment that has an impact on referrals, even if ultimately it leads to better care or otherwise benefits patients. At the same time, existing anti-kickback safe harbors are very narrow, the group said.

Narrowing the use of these statutes would offer providers greater certainty in the work they’re doing and would allow for clarification of regulatory requirements, AEH said.

“Regulatory uncertainty has put essential hospitals in an untenable position,” AEH said. “The very activities our members undertake to support new delivery system and payment models—actives the Centers for Medicare & Medicaid Services and Congress have encouraged—increase their exposure under the AKS and CMP law.”

The Association of American Medical Colleges (AAMC), which represents academic medical centers, noted in its commentary to OIG that “the Stark and anti-kickback laws are relics of a healthcare system that hadn’t yet conceived of value-based models.”

According to their argument, because alternative payment models are tightly regulated, it’s unlikely that patients would receive poor care, AAMC said.

“It is critical that CMS, the OIG, and other associated agencies coordinate their efforts to allow waivers of the physician self-referral law, the civil monetary penalties and anti-kickback laws, as appropriate to support the clinical and financial integration needed for the success of these new delivery and payment models,” AAMC said.

Included within that legislation was a section sponsored by Senators Marco Rubio and Amy Klobuchar entitled the “Eliminating Kickbacks in Recovery Act” (EKRA) which essentially makes the federal Anti-Kickback Statute applicable to private health care plans. As adopted, the new law:

Those “exceptions” would be generated by HHS through adoption and publication in the Code of Federal Regulations (CFR).

We have reported in the past that it seems fundamentally unfair that healthcare providers involved in federally funded programs could seek guidance from OIG as to their behavior, while private pay providers could not. This was specifically true for providers in the SUD treatment space, who could only seek such input from their regulating agencies, such as the Department of Children and Families (DCF) in Florida. But since only the Florida Patient Brokering Act applied to such behavior, which is a state (not federal) criminal law, DCF was not authorized to comment upon such behavior.

With the adoption of EKRA and the anticipated development of regulations adopting “safe harbors,” SUD treatment providers should have clarity on what behaviors would trigger federal penalties. That law, however, does not cause state laws, such as Florida’s Patient Brokering Act, to be superseded. Those laws will remain on the books and will be prosecuted separately, without interpretation of the new federal law having any impact.