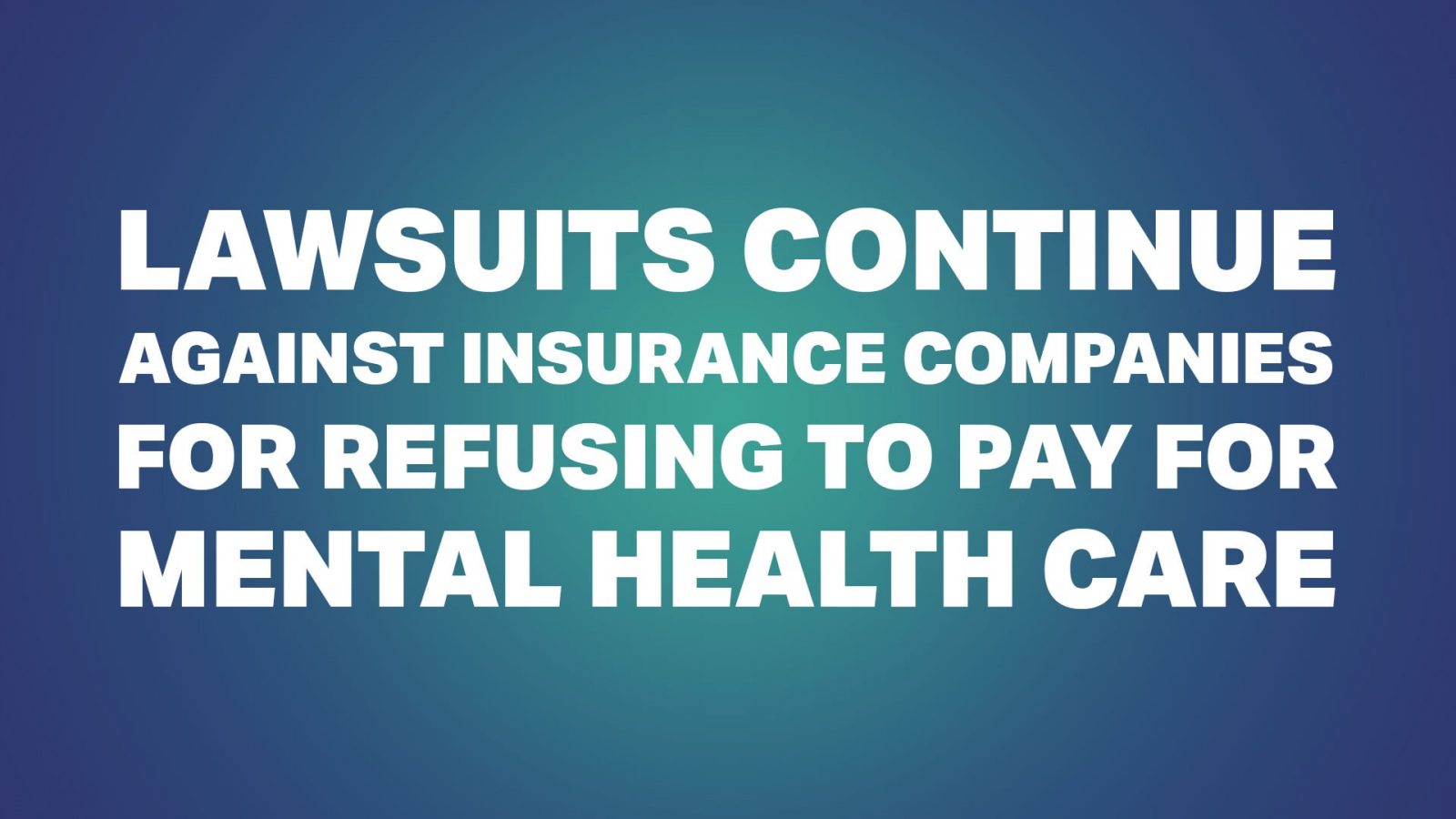 Happy Thanksgiving to all of our readers.

Before the holiday break, I wanted to quickly give everyone a brief update on some interesting recently filed federal lawsuits against insurance providers relating to behavioral health.  We all have a lot to be thankful and grateful for as it relates to the plaintiffs and their lawyers who are fighting the “David v. Goliath” battle against many health insurance companies who continue to deny reimbursements for critical mental health care including behavioral health and Substance Use Disorders.

In the pending case of K.H.B. v. UnitedHealthcare Insurance Co.,  in the U.S. District Court for the District of Utah, UnitedHealthcare is seeking to convince a Utah federal judge to reject most of a proposed class action brought by plaintiffs accusing it of improperly denying health insurance claims for wilderness therapy, a form of therapy said to be able to treat young people with substance abuse and mental health issues.  UnitedHealthcare moved to dismiss three out of four claims in an Employee Retirement Income Security Act suit that claims the company should have paid for the trip to a wilderness program attended by the plaintiff identified only as K.H.B.

Plaintiff K.H.B. alleged UnitedHealthcare is illegally disregarding the 2008 “Mental Health Parity and Addiction Equity Act”, a law that requires health care plans to provide about the same coverage for mental health and substance abuse claims that they provide for medical and surgical claims.  United responded that the pleadings “fell short on the claim for an alleged violation of that statute.”

According to K.H.B.’s amended complaint in August, he suffers from a wide range of mental illnesses, and sought help at a wilderness program after trying to commit suicide for the second time.

While he was insured by a UnitedHealthcare ERISA-governed health plan that covered mental health services, coverage for outdoor and wilderness behavioral programs are denied by UnitedHealthcare, even when the programs are required to treat mental issues, the amended complaint had alleged. He has said that he personally had to pay up almost $38,000 for his time spent at the program. And while K.H.B. has argued that outdoor and wilderness behavioral programs offer a cost-effective method for treating young people with mental health issues, UnitedHealthcare said that there hasn’t been a consensus reached in the scientific community as to whether such programs are effective.

[NOTE: Any waiver or reduction in the published costs of services could rise to an allegation of a state’s Patient Brokering laws, or potentially the new federal “Eliminating Kickbacks in Recovery Act” (EKRA) which makes any form of kickback within the addiction treatment space a federal crime.]

Also recently filed is the case of Steve C., et al., v. Blue Cross Blue Shield of Massachusetts Inc., in the U.S. District Court for the District of Massachusetts.  The suit’s plaintiffs are identified by the aliases Steve C. and Kelly W., along with daughter Jane Doe. The suit alleges that claims for Jane’s treatment for depression, anxiety and obsessive-compulsive disorder at a Utah inpatient facility were denied by the insurer despite being medically necessary.

After Jane was admitted to the inpatient facility on Feb. 26, 2016, Steve and Kelly submitted claims to their insurer, Blue Cross of Massachusetts. The insurer agreed to pay for the first 16 days of Jane’s treatment, but it said any treatment provided after March 14, 2016, would not be covered because it was not medically necessary, the complaint said.

After Steve and Kelly appealed Blue Cross’ decision, the company responded in October 2016 that it had made a mistake and would not be covering any of the treatment costs, citing the insurance plan provisions that it said excluded any intermediate inpatient treatment, even when it is medically necessary, the suit claims.

Steve and Kelly initiated a second appeal in March 2017, quoting the language of the insurance policy indicating that intermediate treatment was covered for mental health and substance abuse treatment, and that Blue Cross’ application of the “acute” limitations violated the policy and the Parity Act.

Blue Cross never responded to the second appeal, the complaint alleges, and never paid for any part of Jane’s treatment at the Utah facility. Jane received inpatient treatment for more than 10 months, and the suit said she experienced great progress and has become more functional.

Jane’s parents paid in excess of $185,000 for treatment that the suit claims should have been covered by Blue Cross because it was medically necessary.

The suit seeks restitution for the out-of-pocket expenses incurred by the proposed class members and an injunction preventing Blue Cross of Massachusetts from continued violation of its own insurance policies and of the Mental Health Parity and Addiction Equity Act, and a reprocessing of the class’ residential treatment claims.

And then there is the case of Smith et al. v. United Healthcare Insurance Co. et al., in the U.S. District Court for the Northern District of California. In this case, a proposed class of employees who received psychotherapy through their employers’ health care plans sued United Healthcare Insurance Co. and United Behavioral Health in California federal court, accusing them of flouting the Employee Retirement Income Security Act (“ERISA”) by imposing unfair reimbursement limits on psychotherapy services.  The lawsuit targets a policy allowing United to pay therapists less when they have their master’s degrees and even lesser when they are certified psychologists. When United pays less to these therapists, customers foot larger portions of the bill, the workers state.

“Through these penalties, United is devaluing psychotherapy and is ultimately limiting access to an essential health benefit that plays a critical role in addressing pervasive public health issues, such as mental health and substance abuse disorders,” said the lead plaintiff’s counsel.

The lawsuit seeks to enjoin United from imposing its reimbursement reduction policy, which allows the insurer to pay 25 percent less to psychologists and 35 percent less to master’s-level therapists.

The suit also looks to require United to pay for or reprocess all claims that it denied under that policy.

bcbs, blue cross, insurance, Lawsuit, optum, Parity, united
SOBER LAW NEWS IS A LEGAL WEBSITE PROVIDING NEWS, COMMENTARY AND OPINIONS ON THE ADDICTION TREATMENT AND RECOVERY SERVICES INDUSTRIES. THE ARTICLES REPOSTED ON THIS SITE TAKE AN IN-DEPTH LOOK AT CURRENT TRENDS IN THIS DYNAMIC HEALTH CARE SECTOR AND THE LAWS THAT GOVERN ITS REGULATION AND GROWTH. OUR HOPE AND PURPOSE IS TO PROVIDE RELEVANT AND ACCURATE INFORMATION TO THE PUBLIC AND TO POLICYMAKERS THAT WILL HELP GUIDE THE PROVISION OF ADDICTION TREATMENT OUT OF THE SHADOWS AND INTO TRANSPARENT, MAINSTREAM HEALTH CARE. THE INFORMATION PROVIDED ON THIS WEBSITE IS FOR INFORMATIONAL PURPOSES ONLY AND IS INTENDED AS A PUBLIC SERVICE. ANY QUESTIONS OF A LEGAL NATURE SHOULD BE DIRECTED TO AN ATTORNEY, AND THE INFORMATION ON THIS WEBSITE IS NOT INTENDED TO REPLACE LEGAL ADVICE FROM A LICENSED ATTORNEY IN YOUR STATE. BY USING THIS WEBSITE, YOU ACKNOWLEDGE THAT YOU MAY NOT RELY UPON OR REFER TO THE CONTENTS AS BEING LEGAL ADVICE OR GUIDANCE PROVIDED BY JEFFREY C. LYNNE, ESQ., WITHOUT HIS PRIOR WRITTEN CONSENT.