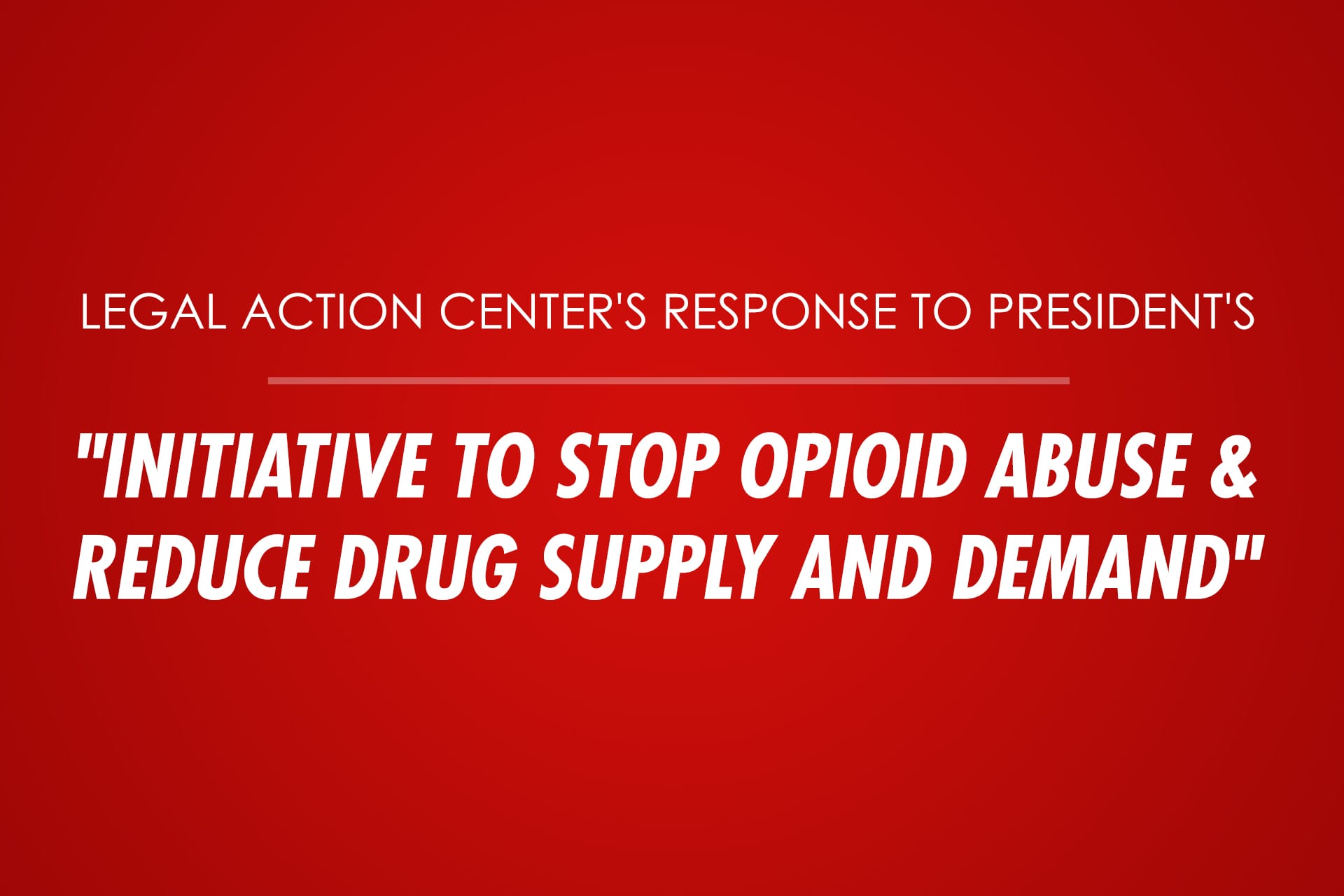 Yesterday in New Hampshire, President Trump outlined his administration’s three-pronged plan for addressing the opioid epidemic. While the strategy includes certain components critical to expanding access to evidence-based addiction care, it lacks specificity on health approaches and falls well short of the comprehensive public health response needed to address a crisis that is currently claiming the lives of over 175 Americans each day. Further, the plan’s emphasis on the failed punitive policies is out of step with what we know from decades of public health and public policy data.

One stated goal of the President’s “Initiative to Stop Opioid Abuse and Reduce Drug Supply” is to “expand access to evidence-based addiction treatment in every State, particularly MAT for opioid addiction”, a critical need which we strongly endorse. The Legal Action Center supports certain additional tactics outlined in the President’s plan to “increase availability of the life-saving overdose reversal drug Naloxone, to expand access to residential SUD treatment and to improve treatment options for people within the criminal justice system, and looks forward to hearing the details of their operationalization.

However, the President’s proposal does not sufficiently address the reality that bringing an end to the opioid epidemic is dependent on a significant federal investment to strengthen and expand the national system of care for all substance use disorders. Many communities, especially in rural areas, have a complete dearth of qualified addiction treatment providers. Strengthening the existing addiction care workforce and developing expertise in the rest of the healthcare system to help prevent and treat addiction also is critically needed. Addressing this gap in coverage will require both short and long term investments and policies that align with the goal of expanded access to effective community-based prevention, treatment and recovery supports. The 2010 Affordable Care Act, for the first time in history, included coverage of substance use disorders as an Essential Health Benefit, and the 2008 Mental Health Parity and Addiction Equity Act requires insurers to cover mental health and addiction services at a level that is equal to coverage of medical and surgical services. The federal government should be working with States to enforce the Parity Act, and to ensure that all insurers, including Medicaid, Medicare and commercial plans, are covering all evidence-based services – including all three FDA approved addiction medications – at par with other health conditions.

Good access to Medicaid is critical to achieving the goal of expanded access to substance use disorder care. This includes expanding – rather than restricting– Medicaid eligibility, which provides coverage for millions of Americans who struggle with substance use disorders. The Legal Action Center strongly supports and has long advocated for making residential substance use disorder care more accessible to people enrolled in Medicaid by repealing the IMD exclusion and CMS issuing waivers until Congress changes the law. At the same time, the initiative’s stated goal of expanding access to evidence based treatment cannot be achieved if the Administration continues to take regulatory actions to weaken the Medicaid program through severe funding cuts and enrollment restrictions such as work requirements and lockout provisions. The administration must stop taking actions to limit people’s ability to get Medicaid if it is serious about stemming the opioid crisis.

Similarly, the Legal Action Center strongly supports the need to link people struggling with addiction in the criminal justice system to the care they need, but this action must include people with all forms of substance use disorder, not just opioid use disorder as proposed by the President’s Initiative. We agree with, and have long advocated for, diverting as many people with addiction away from the criminal justice system and connecting them to treatment. We encourage the administration to support diversion as early in the process as possible and to consider use of other home and community-based settings. We also urge the Administration to ensure that there is good access to evidence-based harm reduction approaches, including syringe-exchanges and safe consumption facilities, as well as all three FDA-approved addiction medications and residential treatment.

The Legal Action Center strongly opposes several aspects of the President’s Initiative that focus on punitive approaches. Research has clearly and repeatedly shown that a heightened focus on enforcement does not work to either reduce drug supply or demand, and that the ‘War on Drugs’ disproportionately targeted low-income communities of color and fueled mass incarceration. There is wide agreement among the American public as well as on both sides of the aisle that we need to shift away from a punitive approach to drug policy to a much more effective and less costly approach of treating addiction and supporting effective re-entry policies. There is also robust evidence that the majority of those incarcerated have diagnosed substance use disorders, and that many of them have been incarcerated as a result of criminal activity arising directly from their addiction. This includes those who are convicted of low-level drug dealing to support their addiction. We strongly condemn the suggestion that the death penalty should be sought for drug trafficking, since all evidence shows that such a policy would not reduce drug use, would be very costly and would fall disproportionately on people of color and those without financial means.

While we appreciate the administration’s recognition of the need to develop a plan to address this critical public health emergency and some of its proposals, we urge the Administration to invest sufficient resources to successfully combat the opioid and other substance use epidemic; prioritize proven health responses including expanding health care coverage of substance use disorders and quality prevention, treatment services and medications, evidence-based harm reduction approaches, and recovery supports; and not return to failed punitive policies of the past that did great damage to our country without reducing drug misuse and addiction.

funding, government, jail, MAT, Medicaid, medicare, Opioid, President
SOBER LAW NEWS IS A LEGAL WEBSITE PROVIDING NEWS, COMMENTARY AND OPINIONS ON THE ADDICTION TREATMENT AND RECOVERY SERVICES INDUSTRIES. THE ARTICLES REPOSTED ON THIS SITE TAKE AN IN-DEPTH LOOK AT CURRENT TRENDS IN THIS DYNAMIC HEALTH CARE SECTOR AND THE LAWS THAT GOVERN ITS REGULATION AND GROWTH. OUR HOPE AND PURPOSE IS TO PROVIDE RELEVANT AND ACCURATE INFORMATION TO THE PUBLIC AND TO POLICYMAKERS THAT WILL HELP GUIDE THE PROVISION OF ADDICTION TREATMENT OUT OF THE SHADOWS AND INTO TRANSPARENT, MAINSTREAM HEALTH CARE. THE INFORMATION PROVIDED ON THIS WEBSITE IS FOR INFORMATIONAL PURPOSES ONLY AND IS INTENDED AS A PUBLIC SERVICE. ANY QUESTIONS OF A LEGAL NATURE SHOULD BE DIRECTED TO AN ATTORNEY, AND THE INFORMATION ON THIS WEBSITE IS NOT INTENDED TO REPLACE LEGAL ADVICE FROM A LICENSED ATTORNEY IN YOUR STATE. BY USING THIS WEBSITE, YOU ACKNOWLEDGE THAT YOU MAY NOT RELY UPON OR REFER TO THE CONTENTS AS BEING LEGAL ADVICE OR GUIDANCE PROVIDED BY JEFFREY C. LYNNE, ESQ., WITHOUT HIS PRIOR WRITTEN CONSENT.