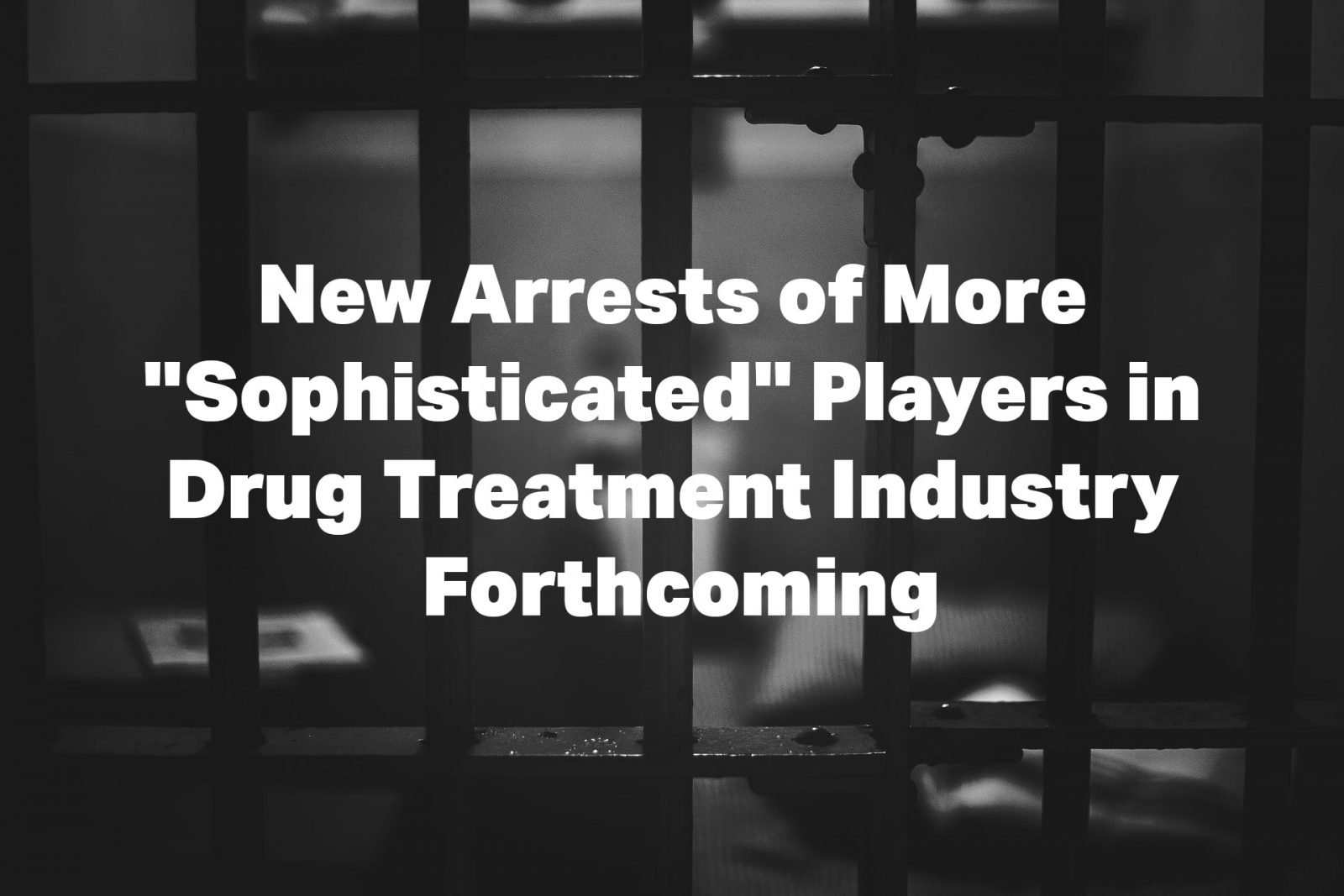 Hot off of the (local) presses is an article written by South Florida Sun Sentinel reporter Marc Freeman, in his piece “More arrests to come in crackdown on drug-recovery industry, prosecutor vows,” who asks the question: “In light of the resounding success from the Task Force’s law enforcement/investigative component, is it time for Palm Beach County State Attorney Dave Aronberg and his sober-homes cleanup crew to declare victory and disband?”

The response from the State Attorney Aronberg – “Hardly.”

When created over 3 years ago, the Task Force was a “first of its kind,” and still is an unusual group of law enforcement agencies, legitimate drug treatment providers, prosecutors, city and state agency representatives. According to the State, the Task Force’s work to date has resulted in 100 cases involving 87 people; the two most recent cases were filed last month. All were charged with multiple counts of patient brokering, with some cases aided by tips from a hotline.

Among the 87 people the state has charged with patient brokering, 38 have so far pleaded guilty, one had charges dropped due to a problem with witnesses, and one man was convicted at a trial last February.  “At its heart, the evil of patient brokering is that it corrupts the health care system because your decisions as to whom your provider should be are not made by who gets you well but rather who’s paying you,” Aronberg said. “You’re being shuttled in and out of these corrupted drug-treatment centers, these flophouses, for money, until you leave in an ambulance or a body bag.”

According to Aronberg, the focus has now shifted, moving beyond what was called “low hanging fruit” (reckless treatment-center operators and corrupt sober-home landlords that have taken advantage of recovering addicts in the quest for lucrative payouts) and into more complicated arrangements found amongst labs, pharmacies, and even physicians.  “We are starting to see it morph into some of the more sophisticated actors, the labs for example … the doctors, people who have corporate veils and attorneys to protect them. And so that’s different from originally, when it was a fly-by-night individual creating mayhem.”

The article states that Aronberg’s office has indicated there will be a new round of arrests within the next 30-45 days, and on an even larger scale than has been seen since the crackdown began in 2016. One of the potential defendants has been characterized in the article as a “real surprise” and another one being “kind of shocking.”

addiction, Aronberg, arrest, Doctor, Fraud, Lab, palm beach, Patient Brokering, Physician, task force
SOBER LAW NEWS IS A LEGAL WEBSITE PROVIDING NEWS, COMMENTARY AND OPINIONS ON THE ADDICTION TREATMENT AND RECOVERY SERVICES INDUSTRIES. THE ARTICLES REPOSTED ON THIS SITE TAKE AN IN-DEPTH LOOK AT CURRENT TRENDS IN THIS DYNAMIC HEALTH CARE SECTOR AND THE LAWS THAT GOVERN ITS REGULATION AND GROWTH. OUR HOPE AND PURPOSE IS TO PROVIDE RELEVANT AND ACCURATE INFORMATION TO THE PUBLIC AND TO POLICYMAKERS THAT WILL HELP GUIDE THE PROVISION OF ADDICTION TREATMENT OUT OF THE SHADOWS AND INTO TRANSPARENT, MAINSTREAM HEALTH CARE. THE INFORMATION PROVIDED ON THIS WEBSITE IS FOR INFORMATIONAL PURPOSES ONLY AND IS INTENDED AS A PUBLIC SERVICE. ANY QUESTIONS OF A LEGAL NATURE SHOULD BE DIRECTED TO AN ATTORNEY, AND THE INFORMATION ON THIS WEBSITE IS NOT INTENDED TO REPLACE LEGAL ADVICE FROM A LICENSED ATTORNEY IN YOUR STATE. BY USING THIS WEBSITE, YOU ACKNOWLEDGE THAT YOU MAY NOT RELY UPON OR REFER TO THE CONTENTS AS BEING LEGAL ADVICE OR GUIDANCE PROVIDED BY JEFFREY C. LYNNE, ESQ., WITHOUT HIS PRIOR WRITTEN CONSENT.