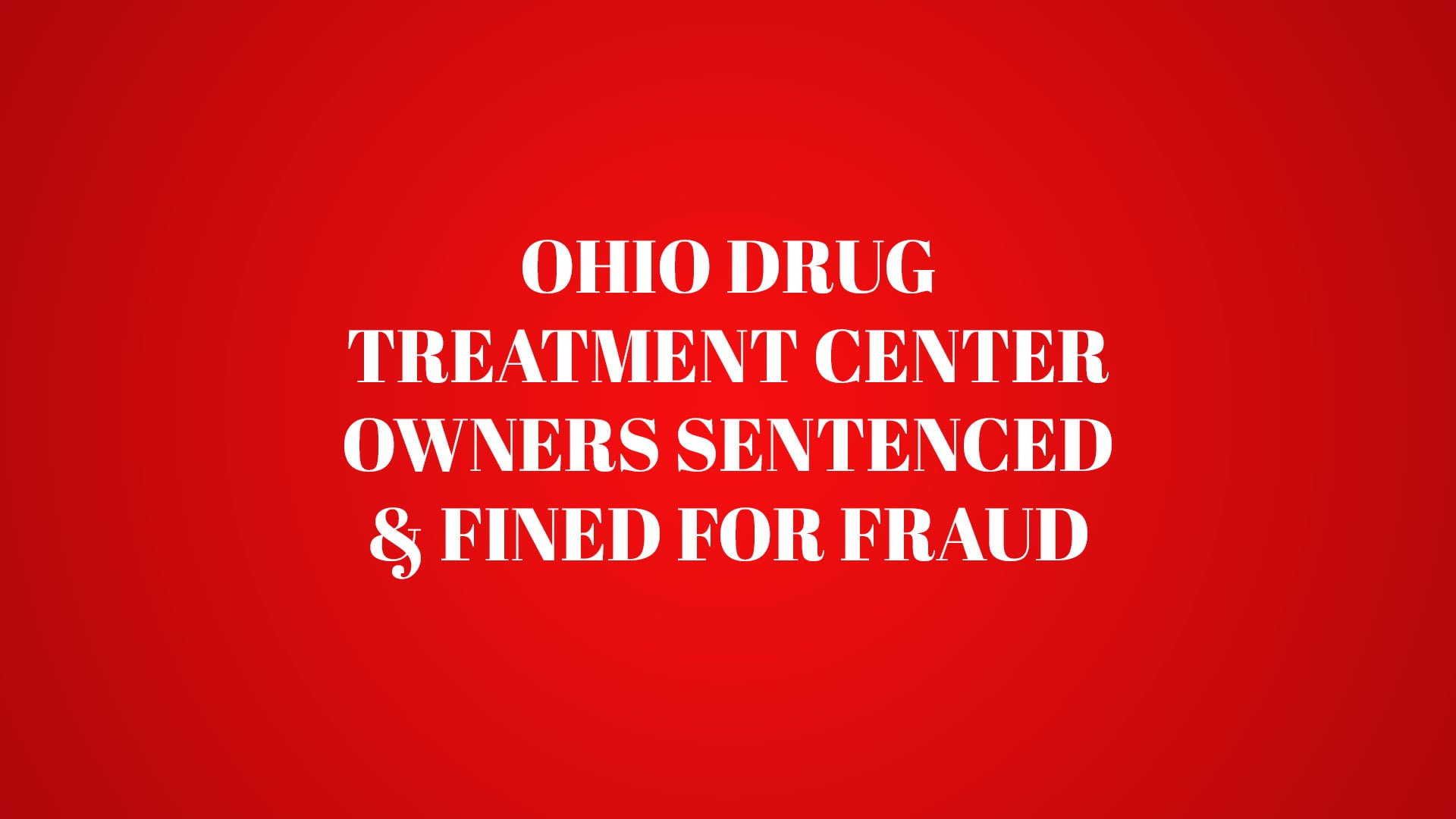 On June 16, 2020, the U.S. Attorney’s Office for the Northern District of Ohio announced that Jennifer Sheridan, age 42, of Austintown, Ohio, was sentenced to 27 months imprisonment, and ordered to pay $15,957,148 in restitution after pleading guilty to one count of health care fraud conspiracy.

Jennifer Sheridan is the last of six defendants to be sentenced for crimes related to a health care fraud conspiracy in which Medicaid was billed $48 million for drug and alcohol recovery services, many of which were not provided, not medically necessary, lacked proper documentation, or had other issues that made them ineligible for reimbursement.

“Today’s sentencing marks the conclusion of a case in which the defendants conspired together to use the drug epidemic as a way to steal tens of millions of dollars from taxpayers through fraudulent billing practices and other crimes,” said U.S. Attorney Justin Herdman. “The defendants’ actions have earned them jail time and over $24 million in restitution. We will continue to hold anyone accountable who tries to take advantage of the drug epidemic and Ohio taxpayers.”
“This is the last defendant to receive their deserved sentence for fraudulent and deceptive criminal behavior,” stated FBI Special Agent in Charge Eric Smith.  “These individuals preyed on a healthcare system that is in place to help those in need and not to be used as an ATM to cipher millions of dollars from the taxpayers for their own pleasures.”

“Today’s sentencing should serve as a message to all healthcare professionals who choose to fraud the government and contribute to the misuse of prescription drugs,” said DEA Special Agent in Charge Keith Martin.

“This sentence is the final chapter of a heartless plot to exploit recovering addicts for personal gain,” Ohio Attorney General Dave Yost said. “I’m proud to work alongside our federal partners to hold these wrongdoers accountable.”

On January 22, 2020, Ryan P. Sheridan, 39, of Leetonia was sentenced to 7 ½ years imprisonment and ordered to pay $24,479,939 in restitution after pleading guilty to various health care fraud conspiracy crimes. Ryan Sherdian was the owner and operator of Braking Point Recovery Center, which operated in the Youngstown and Columbus areas.

On March 12, 2020, co-defendant Kortney L. Gherardi was sentenced to 18 months imprisonment and ordered to pay $2,413,838.42 in restitution after pleading guilty to conspiracy to commit health care fraud.

According to court documents:

Between January 2015 and October 18, 2017, Sheridan and various other defendants submitted or caused to be submitted billings to Medicaid for drug and alcohol services that were: coded to reflect a service more costly than was actually provided; without proper documentation; without proper assessment documents containing valid diagnosis; billings for patients whose records did not contain diagnosis by a physician; related to treatment at unlicensed inpatient beds; billings related to dispensing of Suboxone, even though the treating physician did not have the authority to do so; for case management services when, in fact, the clients were working out at Sheridan’s gym; billings based on quotas provided to the nurses by the defendants to bill four to five hours of treatment daily, even if the services were not medically necessary; billing for in-patient detox and drug treatment services that were, in fact, provided in an out-patient setting, among other violations.

Braking Point submitted approximately 134,744 claims to Medicaid for more than $48.5 million in services it claimed to provide between May 2015 and October 2017.  The claims caused Medicaid to pay Braking Point more than $31 million.  Medicaid suspended payments to Braking Point on October 18, 2017.

Sheridan and other defendants developed a standard protocol of distributing the same amount of Suboxone to every patient seeking drug treatment immediately upon entering Braking Point’s detox program without being evaluated by a properly licensed physician to determine the medical necessity for the use of Suboxone.  Sheridan had the treating physician use another physician’s DEA data waiver license to dispense more than 3,000 doses of Suboxone in 2017 alone without the data waiver physician having seen the patients.

Sheridan also made numerous financial transactions in excess of $6 million, involving money derived from these unlawful activities, including health care fraud and conspiracy to commit health care fraud.  As such, Sheridan was ordered to forfeit property and proceeds obtained as a result of these crimes, including nearly $3 million, property in Columbiana, Mahoning and Trumbull counties, and eight automobiles, including replicas of vehicles used in the movies “Back to the Future,” “Ghostbusters,” and “Batman.”

This case was prosecuted by Assistant United States Attorneys Mark S. Bennett and Jason M. Katz, and Special Assistant United States Attorney Jonathan Metzler following an investigation by the Department of Health and Human Services — Office of the Inspector General, the Federal Bureau of Investigation, the Drug Enforcement Administration, the Internal Revenue Service, and the Ohio Attorney General’s Medicaid Fraud and Control Unit.

Drug Treatment Center, Fined, Fraud, Ohio
SOBER LAW NEWS IS A LEGAL WEBSITE PROVIDING NEWS, COMMENTARY AND OPINIONS ON THE ADDICTION TREATMENT AND RECOVERY SERVICES INDUSTRIES. THE ARTICLES REPOSTED ON THIS SITE TAKE AN IN-DEPTH LOOK AT CURRENT TRENDS IN THIS DYNAMIC HEALTH CARE SECTOR AND THE LAWS THAT GOVERN ITS REGULATION AND GROWTH. OUR HOPE AND PURPOSE IS TO PROVIDE RELEVANT AND ACCURATE INFORMATION TO THE PUBLIC AND TO POLICYMAKERS THAT WILL HELP GUIDE THE PROVISION OF ADDICTION TREATMENT OUT OF THE SHADOWS AND INTO TRANSPARENT, MAINSTREAM HEALTH CARE. THE INFORMATION PROVIDED ON THIS WEBSITE IS FOR INFORMATIONAL PURPOSES ONLY AND IS INTENDED AS A PUBLIC SERVICE. ANY QUESTIONS OF A LEGAL NATURE SHOULD BE DIRECTED TO AN ATTORNEY, AND THE INFORMATION ON THIS WEBSITE IS NOT INTENDED TO REPLACE LEGAL ADVICE FROM A LICENSED ATTORNEY IN YOUR STATE. BY USING THIS WEBSITE, YOU ACKNOWLEDGE THAT YOU MAY NOT RELY UPON OR REFER TO THE CONTENTS AS BEING LEGAL ADVICE OR GUIDANCE PROVIDED BY JEFFREY C. LYNNE, ESQ., WITHOUT HIS PRIOR WRITTEN CONSENT.