What Does It Mean When We Call Addiction a Brain Disorder? 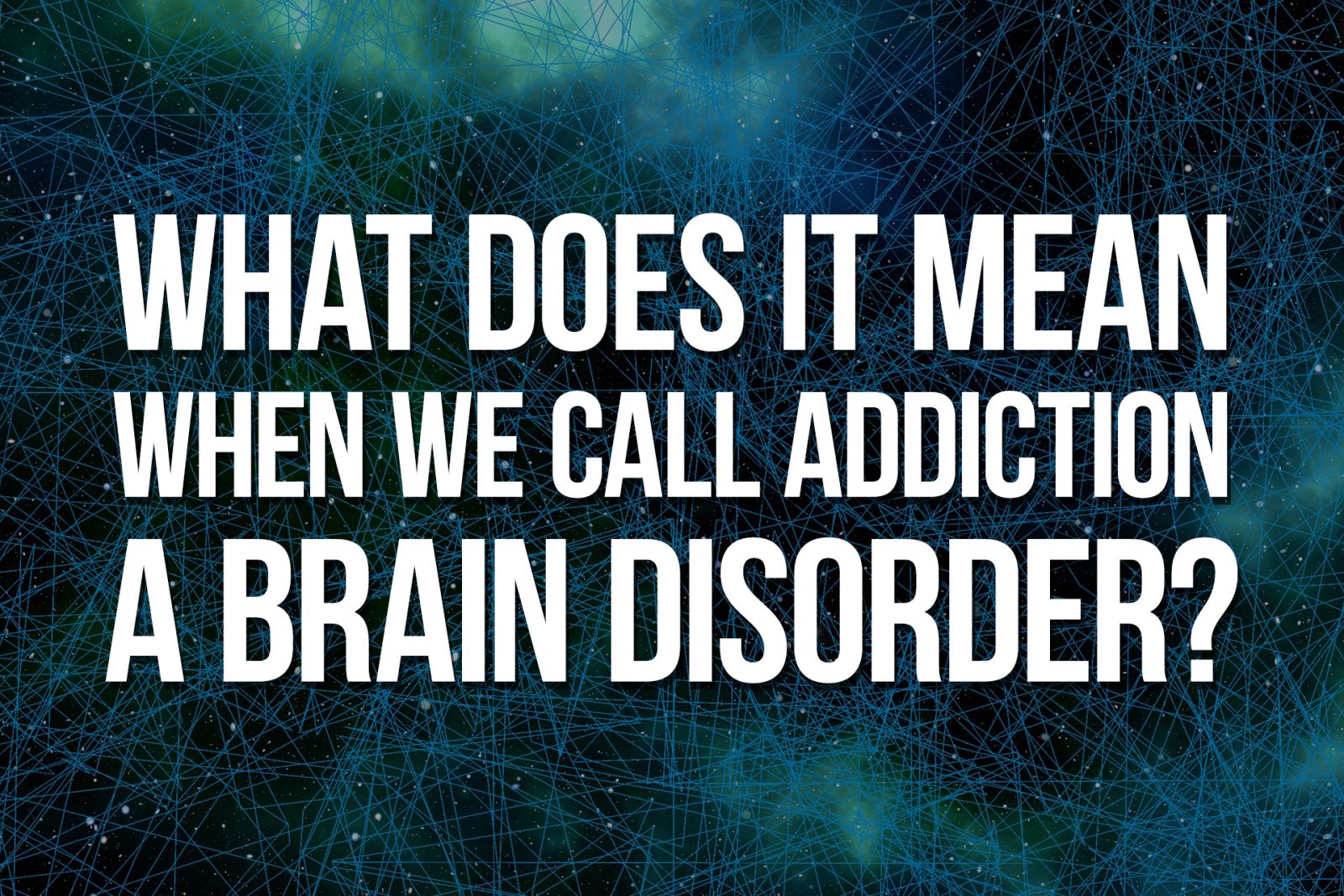 When the 2016 Florida Legislature allocated funds for the formation of the Palm Beach County Sober Homes Task Force, my first instinct was that the State of Florida was looking at the conundrum we here in South Florida were facing through the wrong shade of glasses. To target “sober homes” was simply feeding into the local movement to eradicate addicts in recovery from living amongst society, a long-standing issue which required the U.S. Department of Justice to intervene nationally under the Fair Housing Act and the Americans with Disabilities Act.

The “problem” that we were all experiencing was not “sober homes” [a term, by the way, which has taken on a pejorative meaning, and therefore now rightfully distinguished as either a “Recovery Residence” or a “flop house”], but rather the economy created within the health care sector for delivery of clinical services; the “churn and burn” of patients’ insurance benefits. Law enforcement and government regulators were unable at the time to grasp the vast underground network that was truly the foundational underpinning of everything that was going wrong. Flop houses were merely the effect; the cause was the demand from “health care entrepreneurs” for bodies to put through the machine to bill insurance and make money and the failure of the entire system to sufficiently develop a standard for treatment and post-treatment recovery that health insurance would be required to pay for as being “medically necessary.” This disconnect was further exacerbated by old school, traditional ways of recovery, such as AA and sober living providers, for whom “treatment” was not available decades ago, and who today understandably question the “medicalization” of addiction treatment and care.

As one of the original appointees to the Task Force, it was a pleasant surprise to find that the Palm Beach State Attorney’s Office inherently understood this as well. Their focus was on the entire health care industry serving those afflicted with Substance Use Disorder, and would NOT allow itself to be used as a puppet to develop more sophisticated exclusionary zoning tactics that for far too long had been used to ostracize addicts from cities and make access to care difficult at best. The empaneling of the Palm Beach Grand Jury to study the entire industry simply underscored and emphasized Dave Aronberg’s commitment to fact-finding.

The “Proviso Committee” of the Task Force were made of up health care practitioners, government officials, and industry representatives, who themselves, as a committee, would examine the modern paradigm of addiction care and associated recovery organizations to make recommendations to the Florida Legislature on how to effectively address where the wheels came off the wagon in Palm Beach County and to prevent similar issues developing statewide. Mr. Aronberg noted early on both that “we can’t arrest our way out of this problem” and that addiction treatment and recovery communities have been a long-standing, respectable, and honorable part of the fabric of Palm Beach County.Early on, the Task Force came to recognize the disparate opinions within the field itself. While some felt strongly the focus should be on recovery support services, others leaned towards a medical model of care (to include MAT). Advocates on both sides seemed (and appear to continue to be) at odds over what is the “right” way to address the current opioid epidemic, and well as how to define “best practices” for our future. Even those on the medical/clinic side seemed to debate whether addiction was rightfully classified as a “disease” or a “brain illness.”

As our science has evolved (rather quickly, it seems of late), Dr. Nora Volkow, the director of the National Institute on Drug Abuse (NIDA), which is part of the National Institutes of Health (NIH), attempted to address the medical side of addiction care and the role that recovery support services has, in her article published in Scientific American entitled “What Does It Mean When We Call Addiction a Brain Disorder?” In the article, she writes:

Yet the medical model of addiction as a brain disorder or disease has its vocal critics. Some claim that viewing addiction this way minimizes its important social and environmental causes, as though saying addiction is a disorder of brain circuits means that social stresses like loneliness, poverty, violence, and other psychological and environmental factors do not play an important role. In fact, the dominant theoretical framework in addiction science today is the biopsychosocial framework, which recognizes the complex interactions between biology, behavior, and environment.

Critics of the brain disorder model also sometimes argue that it places too much emphasis on reward and self-control circuits in the brain, overlooking the crucial role played by learning. They suggest that addiction is not fundamentally different from other experiences that redirect our basic motivational systems and consequently “change the brain.”

Some critics also point out, correctly, that a significant percentage of people who do develop addictions eventually recover without medical treatment. It may take years or decades, may arise from simply “aging out” of a disorder that began during youth, or may result from any number of life changes that help a person replace drug use with other priorities. We still do not understand all the factors that make some people better able to recover than others or the neurobiological mechanisms that support recovery—these are important areas for research.

But when people recover from addiction on their own, it is often because effective treatment has not been readily available or affordable, or the individual has not sought it out; and far too many people do not recover without help, or never get the chance to recover. More than 174 people die every day from drug overdoses. To say that because some people recover from addiction unaided we should not think of it as a disease or disorder would be medically irresponsible. Wider access to medical treatment—especially medications for opioid use disorders—as well as encouraging people with substance use disorders to seek treatment are absolutely essential to prevent these still-escalating numbers of deaths, not to mention reduce the larger devastation of lives, careers, and families caused by addiction.

My takeaway from this is article is that my layperson opinion remains unchanged – medical treatment and recovery support services are the “yin” and “yang” of the same medallion. They cannot be separated but rather should be integrated into a continuous model towards sustainable recovery. Each path is different, as each person’s genetics as well as upbringing and life-experiences are unique. We are each a small universe onto ourselves. Therefore, it is my opinion that the billions of dollars being thrown into the “medical” side of the equation but failing entirely to fund the “recovery” side is to simply a band-aid. While I recognize and appreciate American hesitancy to adopt a welfare state for anyone, including the disabled, we must therefore double our efforts to fund and explore brain science so that effective modalities can be implemented which provide people seeking recovery with an accelerated jump start. Medication-Assisted Treatment is but one of those more recent efforts. But we can do more, and as a nation, should spend more, doing so.

Aronberg, Brain, disease, illness, MAT, NIDA, NIH, palm beach, recovery, Sober home, task force, Volkow
SOBER LAW NEWS IS A LEGAL WEBSITE PROVIDING NEWS, COMMENTARY AND OPINIONS ON THE ADDICTION TREATMENT AND RECOVERY SERVICES INDUSTRIES. THE ARTICLES REPOSTED ON THIS SITE TAKE AN IN-DEPTH LOOK AT CURRENT TRENDS IN THIS DYNAMIC HEALTH CARE SECTOR AND THE LAWS THAT GOVERN ITS REGULATION AND GROWTH. OUR HOPE AND PURPOSE IS TO PROVIDE RELEVANT AND ACCURATE INFORMATION TO THE PUBLIC AND TO POLICYMAKERS THAT WILL HELP GUIDE THE PROVISION OF ADDICTION TREATMENT OUT OF THE SHADOWS AND INTO TRANSPARENT, MAINSTREAM HEALTH CARE. THE INFORMATION PROVIDED ON THIS WEBSITE IS FOR INFORMATIONAL PURPOSES ONLY AND IS INTENDED AS A PUBLIC SERVICE. ANY QUESTIONS OF A LEGAL NATURE SHOULD BE DIRECTED TO AN ATTORNEY, AND THE INFORMATION ON THIS WEBSITE IS NOT INTENDED TO REPLACE LEGAL ADVICE FROM A LICENSED ATTORNEY IN YOUR STATE. BY USING THIS WEBSITE, YOU ACKNOWLEDGE THAT YOU MAY NOT RELY UPON OR REFER TO THE CONTENTS AS BEING LEGAL ADVICE OR GUIDANCE PROVIDED BY JEFFREY C. LYNNE, ESQ., WITHOUT HIS PRIOR WRITTEN CONSENT.