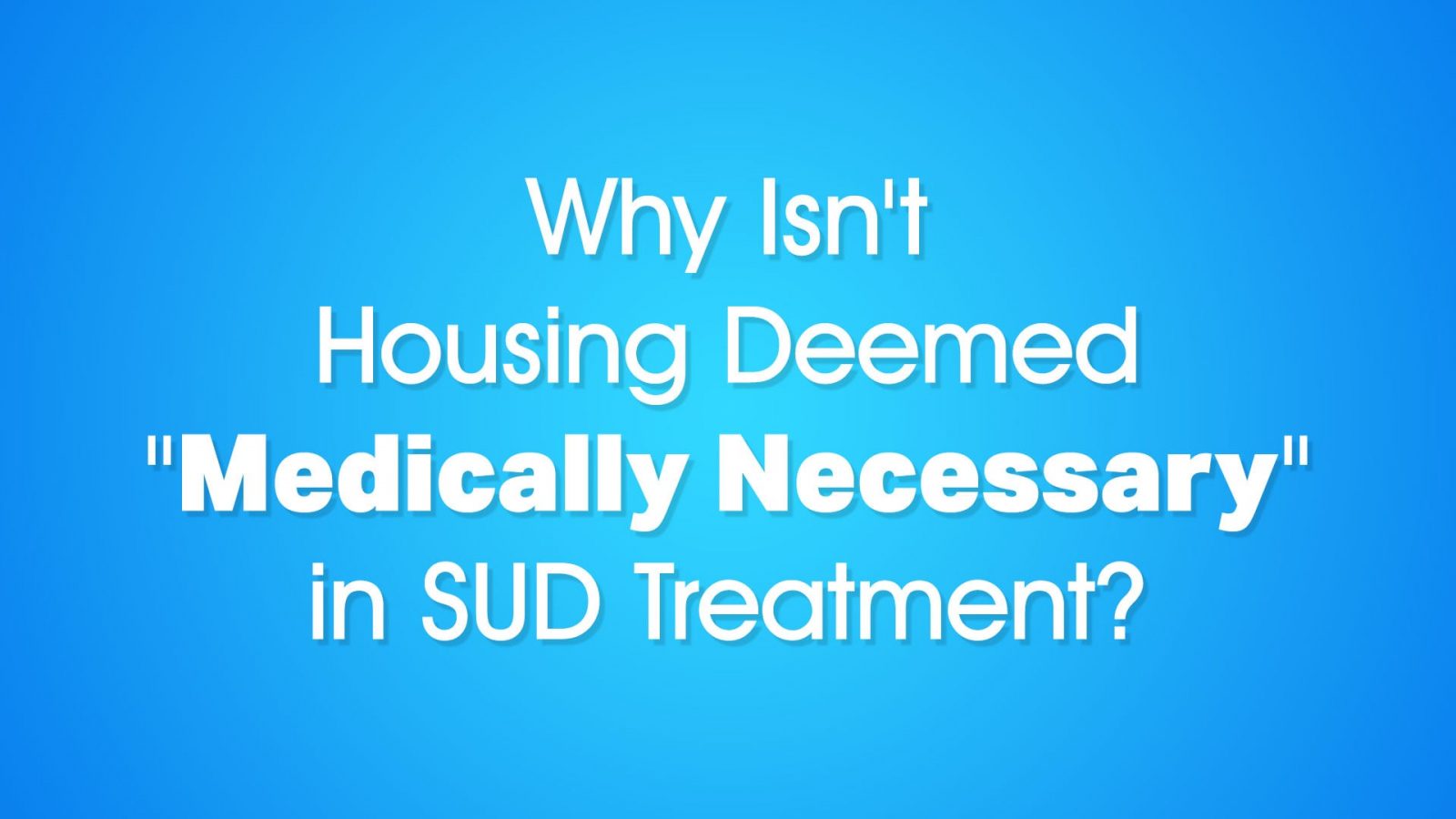 I shock friends and colleagues from time to time by telling them that, “Did you hear…. from now on, insurance is no longer going to cover the cost of a hospital stay associated with any medical procedure, and that the costs of room and board while in post-surgical recovery all must come out of pocket.”

The look of incredulity and anger on their faces is priceless.

I entertain the discussion for a while and let it play out, enjoying listening to all of the justifications why that is abhorrent public policy (and equally bad health care).

Only afterwards, I take the time to tell them that, while I was joking, that it really isn’t a joke when it comes to mental health, behavioral health, and addiction treatment; that after detoxification (and for the lucky few, inpatient residential treatment), that the vast majority of people entering the drug and alcohol treatment space will be forcibly placed by their insurance carriers into an outpatient program but will not cover the necessary costs of a properly trained and supervised recovery residence.

At this point in my experience in this space, I am no longer surprised when they start to try to make a distinction.

However, in a news report that was admittedly surprising to me, HHS Secretary Alex Azar said in prepared remarks (as reported by ModernHealthcare.com) that Medicaid may soon allow hospitals and health systems to directly pay for housing, healthy food or other solutions for the “whole person.”

“What if we gave organizations more flexibility so they could pay a beneficiary’s rent if they were in unstable housing, or make sure that a diabetic had access to, and could afford, nutritious food,” Azar said in a speech supported by the Hatch Foundation for Civility and Solutions and Intermountain Healthcare.

Azar said the Center for Medicare and Medicaid Innovation is looking “to move beyond existing efforts to partner with social services groups and try to manage social determinants of health as they see appropriate…. If that sounds like an exciting idea … I want you to stay tuned to what CMMI is up to.”

“We believe we could spend less money on healthcare—and, most important, help Americans live healthier lives—if we did a better job of aligning federal health investments with our investments in non-healthcare needs,” he said.  According to ModernHealthcare.com, Azar didn’t elaborate on when the model would be launched, but the program could help Medicaid enrollees who need housing.

“These interventions can keep seniors out of the hospital, which we are increasingly realizing is not just a cost saver but actually an important way to protect their health, too,” Azar said. “If seniors do end up going to the hospital, making sure they can get out as soon as possible with the appropriate rehab services is crucial to good outcomes and low cost as well. If a senior can be accommodated at home rather than an inpatient rehab facility or a [skilled nursing facility], they should be.”

Azar was focusing on the agency’s approach to social determinants a day after it was announced that CMS would begin allowing states to cover a broader range of mental health services under Medicaid.

Specifically, CMS would consider Medicaid demonstration waivers (referred to as a §1115 waiver) covering short-term stays for acute care provided in psychiatric hospitals or residential treatment centers in return for states expanding access to community-based mental health services (these proposals would waive the so-called institutions for mental diseases (IMD) exclusion, a section of the Medicaid law (within the Social Security Act) that prohibits the use of federal Medicaid funding for most inpatient psychiatric services).

“It is the responsibility of state and federal governments together, alongside communities and families, to right this wrong,” Azar said. “More treatment options are needed, and that includes more inpatient and residential options that can help stabilize Americans with serious mental illness.”

However, Azar is speaking to psychiatric illness, not Substance Use Disorders, which appear to remain the “ugly stepchild” of health care, generally.

Back in 2014, the State of Illinois asked the Centers for Medicare and Medicaid Services (CMS) for permission to spend $60 million in Medicaid funding to help vulnerable enrollees find and maintain stable housing, joining New York and counties in Minnesota and California in efforts to try to add housing to the list of healthcare services offered to chronically ill Medicaid patients.

At the present time, CMS determined that waivers cannot be used to pay outright for housing. Instead, these state programs can pay for assistance in finding housing, providing home modifications, and educating beneficiaries about tenant rights.

However, CMS has paid rent for Medicaid beneficiaries in the past through grant programs. The “Money Follows the Person” (MFP) demonstration project that was launched in 2008 transitioned Medicaid enrollees from an institutional setting back into the community. 43 states including California, Texas, New Jersey, Ohio, New York, Georgia and the District of Columbia participated in the grant program. Florida opted out.

Though that grant program expired on September 30, 2016, the authorizing legislation required that the Secretary of HHS provide for a national evaluation of the MFP demonstration and submit a final report to the president and Congress that presents the findings and conclusions of this evaluation.  That report can be found here.

MFP also provides strong evidence of success at improving the quality of life of participants. After transitioning to the community, participants experience increases across all seven quality-of-life domains measured, and the improvements are largely sustained two years post-transition. The changes in the quality of life that occur when participants move to the community are remarkable and important indicators that this demonstration has had positive impacts on participants’ lives. Estimating the value of the quality-of-life improvements reported by MFP participants would be extremely difficult, and any dollar value placed on these improvements would not adequately reflect what it means for people with significant disabilities when they can live in and contribute to their local communities.

This reads like it was taken verbatim from The American Journal of Community Psychology’s 2013 study on “The Role of Recovery Residences in Promoting Long-Term Addiction Recovery Outcomes.”

However, it was not, and the need for more-than-adequate sober living accommodations for people in recovery from addiction should be at the top of the list when it comes to health care public policy.

As I said before, we would never make a heart surgery patient go find a hotel to recover in and we would never let insurance carriers refuse to pay for such accommodations.

Let’s hope that HHS Secretary Azar is picking up the mantle from his predecessor and continuing to move addiction treatment health care into the full medical health care continuum, rather than to accept society’s generalized and simplistic view that addicts choose to be addicts, and we should not spend valuable resources on saving their lives.

“We can support both inpatient and outpatient investments at the same time,” Azar said. “Both tools are necessary and both are too hard to access today.”

Azar, CMS, grant, HHS, Medicaid, medicare, recovery residence, Sober home, waiver
SOBER LAW NEWS IS A LEGAL WEBSITE PROVIDING NEWS, COMMENTARY AND OPINIONS ON THE ADDICTION TREATMENT AND RECOVERY SERVICES INDUSTRIES. THE ARTICLES REPOSTED ON THIS SITE TAKE AN IN-DEPTH LOOK AT CURRENT TRENDS IN THIS DYNAMIC HEALTH CARE SECTOR AND THE LAWS THAT GOVERN ITS REGULATION AND GROWTH. OUR HOPE AND PURPOSE IS TO PROVIDE RELEVANT AND ACCURATE INFORMATION TO THE PUBLIC AND TO POLICYMAKERS THAT WILL HELP GUIDE THE PROVISION OF ADDICTION TREATMENT OUT OF THE SHADOWS AND INTO TRANSPARENT, MAINSTREAM HEALTH CARE. THE INFORMATION PROVIDED ON THIS WEBSITE IS FOR INFORMATIONAL PURPOSES ONLY AND IS INTENDED AS A PUBLIC SERVICE. ANY QUESTIONS OF A LEGAL NATURE SHOULD BE DIRECTED TO AN ATTORNEY, AND THE INFORMATION ON THIS WEBSITE IS NOT INTENDED TO REPLACE LEGAL ADVICE FROM A LICENSED ATTORNEY IN YOUR STATE. BY USING THIS WEBSITE, YOU ACKNOWLEDGE THAT YOU MAY NOT RELY UPON OR REFER TO THE CONTENTS AS BEING LEGAL ADVICE OR GUIDANCE PROVIDED BY JEFFREY C. LYNNE, ESQ., WITHOUT HIS PRIOR WRITTEN CONSENT.