Would a Biden Administration Change Course on Substance Use Disorders? 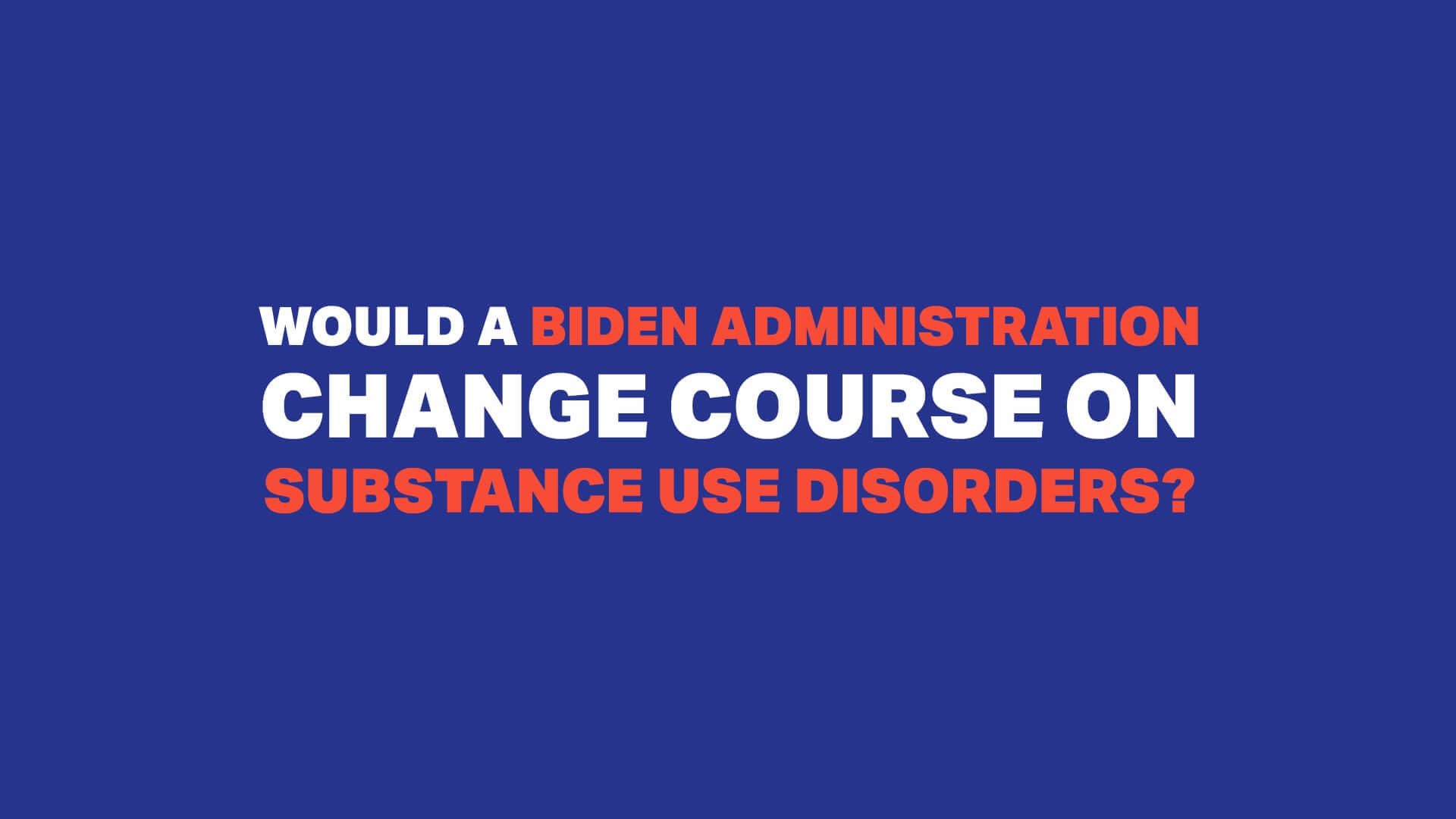 From the start, this is not a political email. But I found myself watching last nights final Presidential Debate of the 2020 campaign, feeling like it was a live episode of Saturday Night Live rather than a discussion over who should be the leader of the free world. Life imitating art, I suppose. Come on, man!

However, while listening to the debate while doing work on my laptop, my ears perked up when I heard certain key words elicited from Vice President Biden:

We commuted over 1,000 people’s sentences, over 1,000. The very law he’s talking about is a law that in fact, initiated by Barack Obama. And secondly, we’re in a situation here where the federal prison system was reduced by 38,000 people under our administration. And one of those things we should be doing, there should be no, no minimum mandatories in the law. That’s why I’m offering $20 billion to states to change their state laws to eliminate minimum mandatories and set up drug courts. No one should be going to jail because they have a drug problem. They should be going to rehabilitation, not to jail. We should fundamentally change the system and that’s what I’m going to do.

Now, we all know that Joe’s son Hunter has had a historic problem with the use of cocaine. To that end, substance abuse has not skipped over the Biden family either. While we know that President Trump’s brother, Fred Jr., descended into alcoholism and died at 42 years old in 1981, the President never openly discussed it or continued the working of the prior administration to advance treatments for SUDs and to remove the stigma surrounding it.

We do know, according to Jack O’Donnell, a former Trump casino executive who later ran an Arizona addiction treatment center, that the President still has not come to terms with his brother’s life and death. “It always felt like it was a dark family secret, and a subject [about] which he did not want to talk,” O’Donnell said. “There is generally a lot of shame around addiction, which is sad. I think the entire Trump family suffers a great deal of shame and unresolved trauma over Fred Jr.’s death.”

To that point, President Trump’s repeated avoidance of acknowledging that Hunter too suffered from SUD and that it is a disease that impacts the entire family, to some degree, allowed the nation to continue to pounce on Hunter as a person of bad moral character. This is no comment on whether the President did anything wrong or whether Hunter Biden did anything inappropriate; I am addressing the lack of any public discussion during the debates or the entire campaign about the first public health emergency – addiction – and our national need to double-down on treatment during Covid-19.

Thinking that was simply a nod to drug courts though, I again focused on my work.

Then, about six-minutes later, I hear this, and my head pops up again from behind my laptop screen:

One of the things is that in the ’80s we passed 100 percent, all 100 senators voted for a bill on drugs and how to deal with drugs, it was a mistake. I’ve been trying to change since then particularly the portion on cocaine. That’s why I’ve been arguing that in fact we should not send anyone to jail for a pure drug offense, they should be going into treatment across the board, that’s what we should be spending money. And that’s why I set up drug courts which were never funded by our Republican friends. They should not be going to jail for a drug or an alcohol problem, they should be going into treatment. That’s what we’ve been trying to do, that’s what I’m going to get done because I think the American people have now seen that in fact it was a mistake to pass those laws relating to drugs, but they were not in the Crime Bill.

When I heard the word “treatment” not once, but twice, I knew that this was now a real issue. I was now listening not to a politician, but rather to a dad who has been there. And still is. Someone who seems to understand that addiction is a lifetime disease, and which takes a lifetime of effort to maintain recovery.

There was no need for Vice President Biden last night to try to woo the “Recovery Community Voter” (as they are not [yet] organized as a unified political voting bloc). He was speaking as a father of a son with addiction. He was speaking to the millions of families with loved ones still going through the first public health emergency. $8 billion from the Sackler family to the states will help, but “$8 billion is a drop in the bucket to these murderers who killed tens of thousands with their ‘miracle’ drugs,” Palm Beach County Commissioner Melissa McKinlay wrote on Twitter. “Justice has NOT been served.”

According to local recovery advocate Maureen Kielian, “I fear if and when Palm Beach County — any county — gets any money, it’s going to be misdirected to the same failing processes and systems that we’re already dealing with.” She said to the Palm Beach Post that she hopes the settlement money will be diverted to the medical and recovery community, not to law enforcement she fears would use it to reinforce the “war on drugs” mentality. “More people will die. The addiction epidemic will continue to get worse,” she said.

And from my vantage point, listening to Vice President Biden last night, he was saying that we, as a nation, would leave no one behind.

That remains to be seen. The election is far from over.

But possibly hope that Americans suffering through SUD can go to affordable treatment without the stigma, shame, and fear that continues to hide in the shadows.

Either way, please vote on or before November 3rd.

addiction, War on drugs
SOBER LAW NEWS IS A LEGAL WEBSITE PROVIDING NEWS, COMMENTARY AND OPINIONS ON THE ADDICTION TREATMENT AND RECOVERY SERVICES INDUSTRIES. THE ARTICLES REPOSTED ON THIS SITE TAKE AN IN-DEPTH LOOK AT CURRENT TRENDS IN THIS DYNAMIC HEALTH CARE SECTOR AND THE LAWS THAT GOVERN ITS REGULATION AND GROWTH. OUR HOPE AND PURPOSE IS TO PROVIDE RELEVANT AND ACCURATE INFORMATION TO THE PUBLIC AND TO POLICYMAKERS THAT WILL HELP GUIDE THE PROVISION OF ADDICTION TREATMENT OUT OF THE SHADOWS AND INTO TRANSPARENT, MAINSTREAM HEALTH CARE. THE INFORMATION PROVIDED ON THIS WEBSITE IS FOR INFORMATIONAL PURPOSES ONLY AND IS INTENDED AS A PUBLIC SERVICE. ANY QUESTIONS OF A LEGAL NATURE SHOULD BE DIRECTED TO AN ATTORNEY, AND THE INFORMATION ON THIS WEBSITE IS NOT INTENDED TO REPLACE LEGAL ADVICE FROM A LICENSED ATTORNEY IN YOUR STATE. BY USING THIS WEBSITE, YOU ACKNOWLEDGE THAT YOU MAY NOT RELY UPON OR REFER TO THE CONTENTS AS BEING LEGAL ADVICE OR GUIDANCE PROVIDED BY JEFFREY C. LYNNE, ESQ., WITHOUT HIS PRIOR WRITTEN CONSENT.